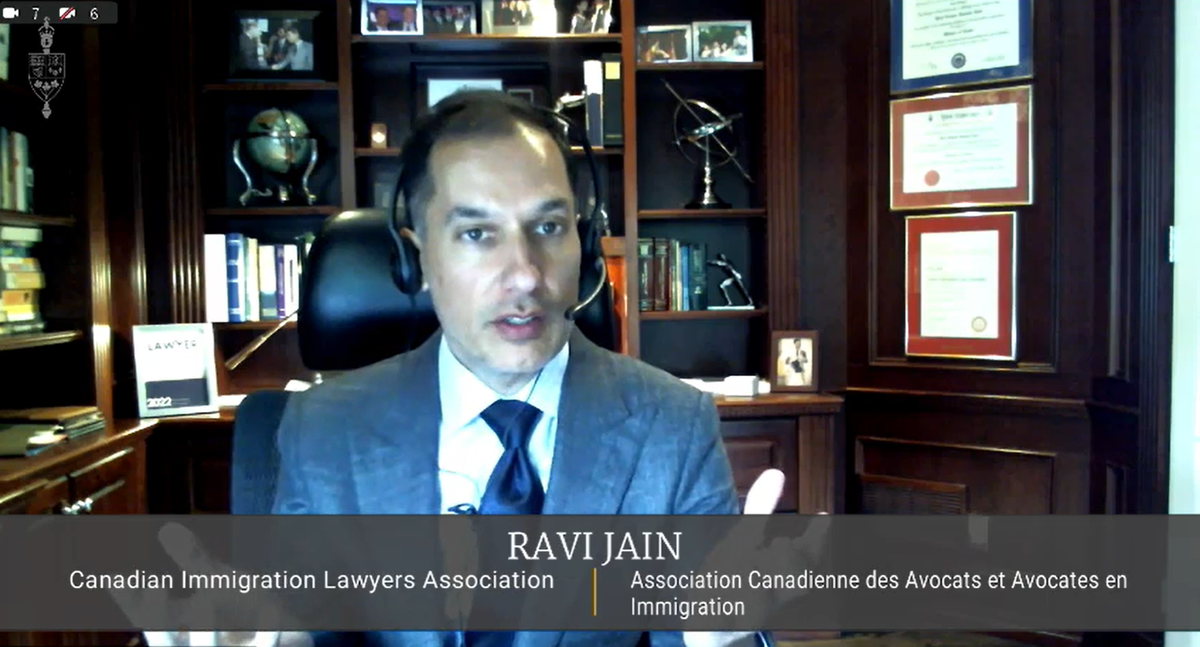 CILA steering committee member Ravi Jain was invited to present to the Canadian Parliament’s Standing Committee on Citizenship and Immigration (CIMM) on June 7, 2022.

Speaking on behalf of CILA, Mr. Jain provided insights on how Canada can improve its immigration application backlogs and processing times.

A summary of Mr. Jain’s remarks is available below:

“As the Committee knows, there are over 2 million applications in the ‘inventory’ or backlog which is about 1 million more than prior to the pandemic.

The backlog is having an enormous impact. First it makes it difficult for Canada to bring in people based on humanitarian reasons when family class and economic immigrants are also in dire need of attention.

Pre-pandemic, I had family sponsorships processed in as little as 4 months. But the current stated timeframe is 12 months yet it’s actually closer to 20. Bear in mind that for spouses and common-law partners, a week can feel like an eternity.

Many Canadian companies are not operating at capacity as they do not have the human resources they need. The unemployment rate is extremely low with 800,000 vacancies and yet the backlog includes 189,061 new work permits and 235,793 economic category permanent residents as of April 29, 2022.

The 2021 census told us that it’s not so much that Canada’s population is aging, it’s already aged. Over 40% of Canadians are now old or getting there. 19% are 65+ years old. 22% are between the ages 55-64. Our fertility rate is 1.4 children per woman yet the replacement rate is 2.1. Bringing in people efficiently is critical to our economic recovery but it was already the case that we needed immigrants for Canada’s long-term economic survival. We need more working-age people to contribute to the tax base to pay for the demands of our aged population.

The other problem with delayed applications is that the greater the backlog, the harder it is to climb out of it. I’m currently taking on cases where the delay is so great, our office is writing demand letters to the Department followed 30 days later by an application in Federal Court. People are also submitting the same application more than once and this was even encouraged by the Delhi visa office for visitor visa applications.

I believe the government must answer for this 2 million backlog. When I was national Chair of the Canadian Bar Association Immigration Section during the pandemic, I asked a rather impolite question which was simply about how many officers were actually working and if they were finding solutions so officers could work from home. I got a vague answer about how immigration officers were part of the federal public service and so questions should be directed outside the Department. But then it was revealed that 80% of staff were on leave at the major processing centers for extended periods.

We need to know exactly what the productivity was, year by year pre-pandemic, during, and now. Why did the TR to PR Pathway result in more applications than intended? Why didn’t the cap work? After all, this category is now cannibalizing Express Entry spots for 2022 and into 2023. IRCC should also analyze whether it is wise to have cap-free programs. While I understand the impulse in terms of Ukrainians who have no cap, IRCC needs to be consistent in its approach.

The 2021 Economic and Fiscal Update proposed $85M in 2022-3 to “process more permanent resident and temporary resident applications and reduce processing times in key areas affected by the pandemic.” The 2022 Federal Budget also announced $2.1B over five yars and $317.6M ongoing in new funding “to support the processing and settlement of new permanent residents to Canada.”

We need to understand how this money will be spent to address backlogs, what will be the government’s priorities and a detailed plan needs to be tabled for scrutiny.

There needs to be greater transparency as to processing times, stage of applications, and reasons for refusals.

IRCC could also invest in emergency-preparedness so Canada can respond to the next war or natural disaster and officers need not be re-deployed away from processing applications which are critical to Canada’s economic and family reunification needs.

Accountability is key and part of that involves the Services Fee Act which ties fees paid to performance standards such that refunds are issued when these standards are not met. IRCC selectively implemented the Act exempting all permanent residence and most temporary resident applications.

It is completely unacceptable for the government to shut down communication with applicants, their lawyers and even Members of Parliament as has been done in the recent past, using the excuse of the Afghanistan crisis and then the war in Ukraine. Indeed, the Program Manager in Delhi replies to emails with her by saying: “Please use the webform… it ensures there is not the false impression of privileged access to Canadian government services… Any further emails send directly to me will be deleted without a response.” And we have been excluded altogether from new digital application filing platforms developed by IRCC with the excuse that these platforms needed to be rolled out so quickly due to the pandemic.

Immigration lawyers are treated very poorly in Canada. I have heard from top managers at visa offices and PNPs about high levels of fraud and negligence by registered consultants and that this has led to policies of shutting out representatives generally. Indeed, on IRCC’s website, we are lumped in with non-lawyer immigration consultants with a warning to the public about fraudulent representatives. Denying applicants access to counsel prejudices many who do not have the sophistication, technological know-how or access to the internet. It is also counter to the rule of law and our Canadian culture where citizens regularly hire lawyers and similar professionals, such as professional accountants given what is at stake. Immigration lawyers spot errors and omissions and are best able to provide complete applications which are often time-sensitive such that a returned application will mean the applicant no longer qualifies. We are highly educated and trained professionals and many of us volunteer significant time and effort in assisting the Department generally, as well as providing pro bono services to the vulnerable public. Immigration lawyers deserve more respect.

Finally, IRCC should have designated officers as essential workers during the pandemic so that this backlog was never allowed to develop. The government itself indicates on Public Safety Canada’s website that Canada’s National Strategy for Critical Infrastructure classifies critical infrastructure in Canada according to ten sectors, one of which is titled “Government” and within that are listed: “workers supporting… permanent residency [and] visas” Given most Canadians are vaccinated, IRCC should adapt its facilities and implement social distancing and personal protection equipment requirements and bring all workers back to the office.

A dysfunctional immigration system prevents us from providing humanitarian help, tears families apart and harms Canadian companies thereby endangering Canada’s competitiveness and hampering our economic recovery at a time when our population has already aged and desperately needs immigration.”